Within weeks of making all Central Govt. employees contribute compulsorily to the PM Cares fund, which is going to remain unaudited, the Central Govt. has brought out a circular freezing DA up to July 2021 for employees and pensioners of Central Govt. Done in the garb of fighting the pandemic, […] 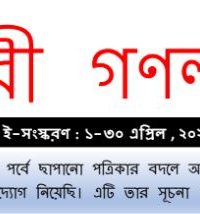 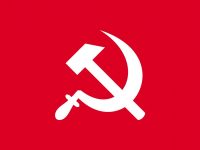 On Fifty One Years of CPI (ML) Formation

Advance Revolutionary Movement; Strengthen the Party On April 22, 1969 Communist movement in India was reorganized for the 2nd time and Communist Party of India (Marxist-Leninist) was formed.  CPI (ML) was formed by All India Coordination Committee of Communist Revolutionaries (AICCCR) on the day when great teacher of the world […] 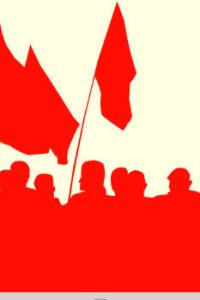 May Day Zindabad!                         Workers of the World, Revolutionary Change The Only Way! Comrade Workers Of India! This May Day, Protest Against Callous and Anti Worker Measures of Central Govt Against Pandemic! Comrades, May Day 2020 has come at a time when people all over the world are facing a […]

Universalize PDS Immediately With Stat Doorstep Delivery ! Migrant workers walked kilometre after kilometre from city after city, running away from sure hunger and need to become beggars. They are still walking in thousands, even though a maximum have failed to reach. Over 40 workers died in this attempt. Workers are sticking it out […] 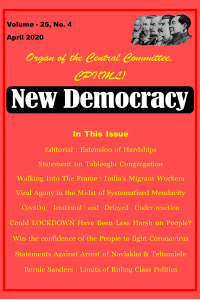 Limits of Articulation of People’s Concerns within Ruling Class Politics

Bernie Sanders’ Withdrawal from Democratic Primary Race Limits of Articulation of People’s Concerns within Ruling Class Politics “Bourgeois socialism attains adequate expression when, and only when, it becomes a mere figure of speech.” (Manifesto of the Communist Party) On April 8, Bernie Sanders announced suspension of his campaign seeking to […]

21 Unions of Jute Workers (Except those affiliated to BJP and TMC) went for a half an hour Dharna in front of factory Gates today on April 17, 2020 demanding not 15 percent but full attendence, and paymennts for lock down period. IFTU workers participated in organizing and conducting these protests. […]

“A  Good Leader Does Not Spread Panic”. For the third time the Prime Minister addressed the countrymen on the menace of Coronavirus and for the third time he failed to articulate in policies any concern for the overwhelming majority of the people of the country who are suffering much more […]

Birth Anniversary of Dr. Bhim Rao Ambedkar on April 14 this year is at a time when the rights enshrined in the Constitution are facing unprecedented attacks from the RSS-BJP ruling dispensation. RSS-BJP have launched an all-round attack on the democratic rights of the people in their drive to impose […]