Retention of power by BJP-JD(U) in Bihar despite widespread anger among the people against the Govts. at the Centre and in the state has increased challenges before the people of the  country. When the elections were announced it was propagated to be an easy victory for the ruling NDA but […]

Aparna (President, IFTU) The Covid Pandemic has given cover to the RSS-BJP Central Govt. to attack working class rights as well as sell out India’s assets to Private Capital, maximally imperialist Capital. Under cover of a lockdown which reeked of police raj rather than containing an illness, those policy decisions […]

In a shocking but hardly surprising step, the CPM led Left Front Govt. of Kerala has vested the police, i.e. controlled by itself at present, with new arbitrary powers to crush dissent. An Ordinance, approved by the Governor on 21st November, has empowered the police to arbitrarily arrest anyone putting posts […] 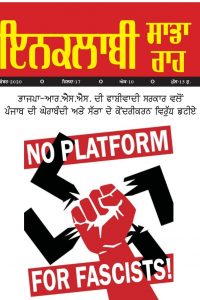 Address and Not Suppress

Selective Truth is a Lie; Selective Justice an Injustice Granting bail to Republic TV’s Arnab Goswami, Justice D.Y. Chandrachud and Justice Indira Bannerjee observed, “If we as a constitutional court do not lay down law and protect liberty, then who will?” Well said especially when people were dying to […]

She was a brilliant student. She stood second in the Telangana Board examination with 98.5% marks. She was awarded an INSPIRE fellowship by the Department of Science & Technology (DST). This fellowship is awarded to top 1% of class XII students. She could take admission in B.Sc. (Hons) Mathematics in […]

P. Suryam ‘Naxalbari’, prior to 1967 was a remote unknown place in West Bengal. But the spring thunder of 1967 made it a part of Indian history. It is a symbol and pathfinder for the oppressed in India. ‘Srikakulam, in North Coastal region of Andhra Pradesh was known as a […] 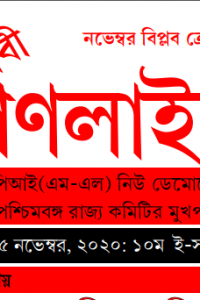