Oppose Warmongering; Support Resolution of Border Dispute through Dialogue Maintaining Peace at the Border Modi’s Statement in the All Party Meeting on June 19 relating to the incident of clash between Indian and Chinese soldiers on June 15, burst the bubble of the jingoist propaganda unleashed by the RSS machinery […] 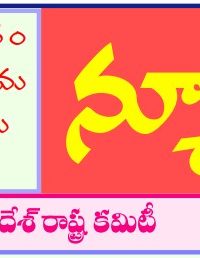 Veteran Communist Revolutionary leader of Odisha and an important leader of different mass movements in the state, Comrade Gananath Patro died on June 6, 2020 at his residence in Rourkela. He was 78 years old and ill for some time. He will particularly be remembered for his active role as […]

RSS BJP Govts Throw Out Labour Laws & Industrial Safety; Negligence Deaths Escalate! In line with the series of industrial ‘accidents’ being reported as minimum safety precautions are willfully dumped in hasty re-openings after the anti worker lockdown, comes news from industrial area Bharuch in Gujarat. A boiler blast in […]

While the Telangana government was celebrating the state formation day, a blast in the Singareni Collieries snuffed out the lives of four contract workers and caused serious injuries to others. Accidents due to negligence and not following safety precautions in the underground mines of Singareni in the past have caused […]

Immediately Release Unwell Varvara Rao, SaiBaba , Pregnant Zargar ! Scrap UAPA! The Central Committee of the CPI(ML) New Democracy urges  the Judiciary to take a hard second look at the policy which will end up settling issues of differing political opinions by throwing political prisoners to the mercy of […]

Do Black Lives Matter, Even Now?

Bourgeois democracy bared its fangs. On May 30, Police force in US particularly in Minneapolis, the city in the state of Minnesota where an African-American was killed by police, tried to brutally suppress the protests demanding justice. The same police whose officers had killed the African American brutally and deliberately, […]

Zameen Prapti Sangharsh Committee (ZPSC) has foiled the plan of the Punjab Govt. to conduct dummy auctions for Dalit share of panchayati land for which ZPSC is struggling for last few years and scored notable successes in this struggle. Now utilizing the cover of Corona, conspiracies are hatched to snatch […]